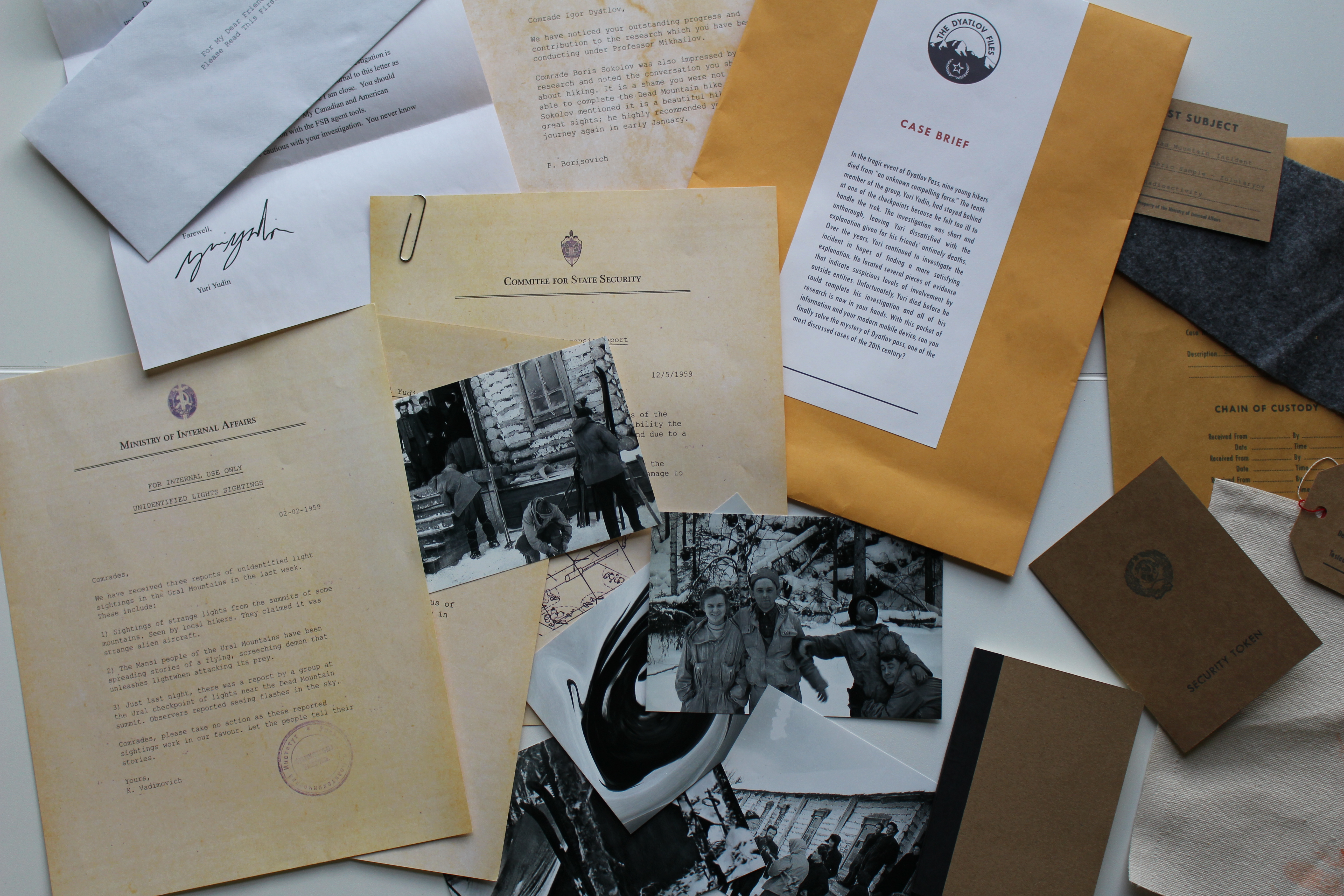 The Dyatlov Files was the pilot product of Unseen Media and was developed during the NYC Media Lab XR Startup Bootcamp. It was an immersive tabletop mystery game that aimed to deliver the experience of an escape room, right in the comfort of our players' living rooms. The story of The Dyatlov Files is our interpretation of the popular conspiracy theories surrounding the Dyatlov Pass Incident, a mysterious and tragic cold case that dates back to 1959 Soviet Russia.

The game had three distinct components that were integral to the core gameplay experience: physical documents, a companion AR app used to examine the physical documents, and various websites that had been set up as part of the game. The game borrowed heavily from established ARG (Alternate Reality Game) tropes to create an immersive universe that blurred the lines of fiction and reality.

In the Dyatlov Pass Incident, 9 young hikers died due to "an unknown compelling force". The 10th member of the group, Yuri, had stayed behind at a checkpoint because he felt "too ill to handle the trek". The investigation was suspiciously short and not thorough, leaving Yuri dissatisfied with the explanation of his friend's untimely deaths. Over the years, Yuri continued his private investigation of the incident hoping to find a more satisfying explanation. He has found several pieces of evidence that hint towards the involvement of university higher-ups, government agencies, and even the military! Unfortunately, Yuri passed before he could complete his investigation and all of his research is in your hands.

After ordering the game, players would receive a shipment of evidence containing autopsy reports, classified government documents, and personal correspondence related to the Dyatlov Pass Incident. The documents would contain puzzles that our players would have to solve using teamwork, wits, and our companion AR app.

The AR app was built in Unity3D and used ARCore to provide our players with a suite of investigative tools that helped them uncover the answers to various puzzles. For example, players could use a facial recognition camera utility that would detect any persons of interest that were related to top-secret Soviet government cases. Use the camera utility on pictures found inside the initial evidence packet, as well as pictures found online was the key to unlocking a large portion of the game's narrative. Other utilities included an image reconstruction utility to rebuild corrupted images, and a Geiger counter to detect radioactivity in physical objects.

The objective of the game is for the players to solve all the puzzles in their way and piece together their conclusion about what happened in the Dyatlov Pass Incident and submit their report to find out the truth. Once the player had solved the Dyatlov Files mystery they would be eligible to tackle other cold cases that were planned for further releases in the series.

The Dyatlov Files was the main focus of our pitch at the 2018 NYC Media Lab Summit and you can watch our final pitch!